Top
This post contains affiliate links, which means that if you click on one of the product links, I’ll receive a small commission. Additionally, as an Amazon Associate I earn from qualifying purchases. Thank you so much for clicking through and helping to support this little blog business of mine! Read more about our site, privacy, and disclosure policies here.

Last week I had the amazing opportunity to hear Fran Drescher speak (Sending a huge thanks to my Aunt Sheree for having me, and hosting such an incredible event!).  Not only is Fran Drescher incredibly funny and beautiful and passionate, but she’s unbelievably inspirational.  She spoke about the story of how The Nanny got its start, and I wanted to share a bit of her story here. Prior to getting her big break with The Nanny, Fran had done a few tryouts and pilots for CBS, but so far, nothing had stuck, and of course, as we all know, she wanted to be an actress. 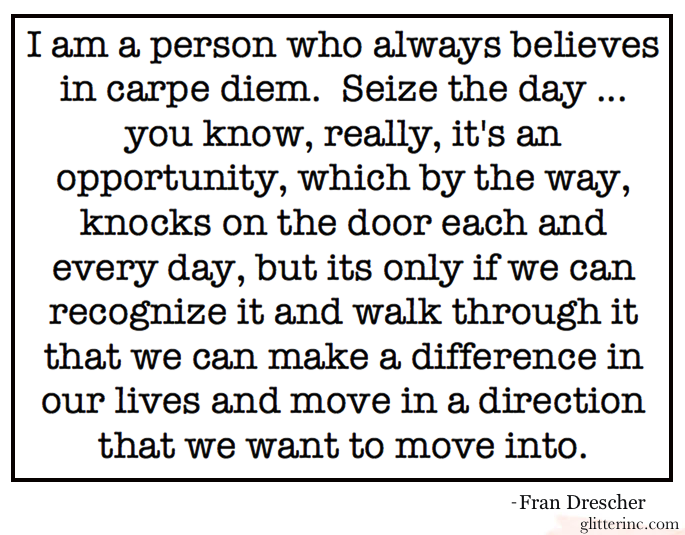 “It wasn’t until I decided to take a vacation and visit a girlfriend who had a little house in the Southwest part of France, that really my life changed forever.  I cashed in some frequent flier miles; it was on TWA and they were running a special, so I had enough mileage to sit in first class.  I get onto the plane and who comes walking onto the plane but the President of CBS television, Jeff Sagansky.  Now I am a person who always believes in carpe diem.  Seize the day  …  I looked up at him and I said, “Jeff?”  and he said, “Fran?” because he knew who I was — I had done a few pilots for CBS and a very short-lived series with Twiggy, so he said “Fran” and I said “Jeff”, and then I ran into the bathroom to put some makeup on.  And as I’m powdering my face I’m saying ‘carpe diem’ ‘carpe diem”, you know, really, it’s an opportunity, which by the way, knocks on the door each and every day, but its only if we can recognize it and walk through it that we can make a difference in our lives and move in a direction that we want to move into.  So when I come out, he’s hanging around the stewardesses section … now the flight attendants … and we started talking.  He said, ‘Oh you know we have a lot of pilots, Fran, we’ll find you something,’ and I said, ‘Jeff, you know, I don’t think you’re going to find me anything that’s gonna fit me hand-in-glove because I’m too unique.  And you’ve gotta hear what my husband and I have been brainstorming, because we know my brand of comedy.’  Well, he was a captive audience because, you know, where was he going to go, Coach? … We didn’t have the idea yet, but I made Jeff think I had the idea.”

After a few days in France, Fran took a flight to London to visit her friend, Twiggy …

“And you know this was a very big milestone trip for me because I had never really done anything this major by myself.  i actually had a bit of a co-dependent personality, and i didn’t like to be alone, it turns out, after twelve years of psycho-therapy.  i was really pushing myself to do something like go over to Europe by myself …”

Fran later has her light bulb moment while babysitting Twiggy’s daughter in London; “So I started schlepping Carly, the proper little English twelve year old school girl all around, because although I had managed to get my ass over there, I still wasn’t comfortable in a major city all by myself.”  After a few humorous hours together, Fran realizes she gives the girl “parenting” advice by not really telling the little girl what’s good for her, but rather, what’s good for Fran, “self-serving advice” as she calls it.  She eventually pitched her idea as a spin on The Sound of Music, except, in Drescher’s words: “Instead of Julie Andrews, I come to the door!”, and with that, the concept for The Nanny was born.  She got her meeting with Jeff and development, and The Nanny went on to be one of the most popular series of the 90s.  And Fran always stuck to her guns; the show, written by Fran and her then husband, took much of its inspiration from Drescher’s personal life growing up in Queens, basing names and characteristics on her funniest relatives and friends.  The Nanny  was lovingly referred to as “the ’90s version of I Love Lucy.”

The moral of the story: seize the day, and don’t forget to powder your nose.