I should start by telling you that this is a long one, about the really tough stuff and the really brilliant stuff that happens in those first few weeks just before, during and after having a baby (the abridged birth story and all) … don’t say I didn’t warn you. 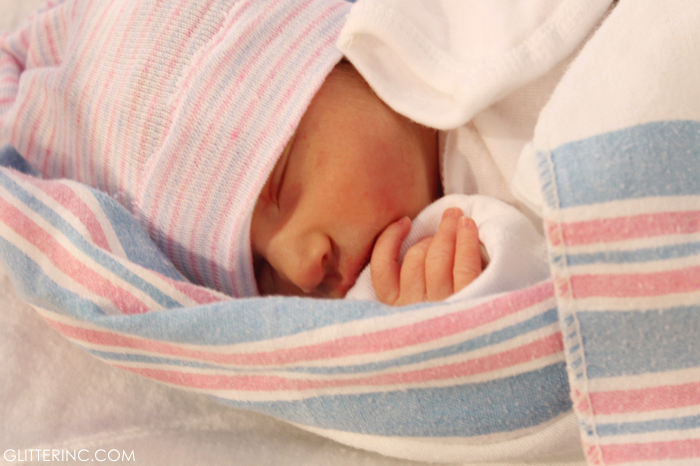 As you may have already heard, our beautiful baby girl, Scarlett Everly, came unexpectedly early.  She also arrived incredibly small.  I think; no, I know, that the type-A in me wanted everything to go according to plan, no matter how ridiculous I knew that expectation was.  But it didn’t, and that’s okay.

At 36 weeks we knew something was wrong.  We were already at a high risk pregnancy doctor because once you’ve had cancer, doctors tend to handle you with kid gloves, and honestly, thank goodness for that.  We were in the weekly ultrasound stage, and our doctor realized baby girl wasn’t growing; in fact, her growth had dropped off dramatically. As the doctor relayed the news, I tried to breathe, to process what I was hearing calmly and rationally; but all I could think was, “Oh g-d, it’s my fault.”  My fears of being “too sick” to have a baby seemed realized, and I felt stupid and helpless and guilty.  (We lost our first pregnancy, and I worried with every step of this second pregnancy that this just wasn’t going to happen for us.)  The doctor suspected IUGR (Intrauterine Growth Restriction) and suggested that it was likely my placenta was no longer giving baby girl what she needed, thus the major drop-off in growth.  All I heard was that my body was starving my baby, and I could have fallen apart right then, but I didn’t.  We made a plan – which helped assuage my firing Type-A nerves – and decided to check baby girl every three days by ultrasound to determine if and when my placenta stopped providing nutrition to the baby.  Once the doctor noticed any further decrease, we would take the baby out – buying her a few extra days or weeks in my womb and precious time to grow.

As the best laid plans often go, a few days later, I went into early labor on a Saturday, and it took us the entire day to realize it was time, no matter how early we thought it was (plus a few errands to Target, the dry cleaner, a leisurely late lunch where I grimaced the entire meal, dinner and an eventual 1am at-home screening of Frozen, which I will forever remember as the movie I writhed through, only to finally race for the hospital as the credits rolled, realizing my contractions were less than five minutes apart.)  Whoops.

I had an emergency c-section after our baby girl’s heart rate began to decelerate sometime early Sunday morning, and we got ourselves an absolutely beautiful five pound baby girl within an hour of arriving at the hospital.  We never really got an answer as to why her little home failed on her, why she had IUGR, why she came early, whether my own health caused the problem – none of the doctors even thought that the direct cause of the IUGR mattered all that much.  And that’s okay too.

As for our days in the hospital, I am so grateful that I didn’t see our sweet baby lined up next to the plump newborns until a few days into our hospital stay, once I knew that she was healthy, because the sight of our little one next to those babies nearly brought me to tears. Despite it all, she passed every test with flying colors and continued to blow us all away with her resilience.  When we left the hospital, Scarlett weighed in at under five pounds. Still, she’s a fighter, small but mighty, and doing so unbelievably well.  Honestly, other than her tiny frame, you’d never know she had a bumpy start.

I can’t even begin to thank everyone enough for their love and support.  My family, for being there each step of the way, for running to the mall and buying every preemie outfit the Miami stores carried (and trust me, preemie baby clothes are shockingly hard to find!), for just being them.  My friends for bringing food and flowers and cookies and jokes – a.k.a., hospital essentials.  The incredible doctors and nurses at the hospital, who taught us so much (because trust me, we were clueless), who held my hand on the tough days (because oh boy, the feelings), and who gave us a perfect healthy baby despite all of the scary stuff.  And hubby.  I love you more now, I love you always, thank you, truly.

The first few weeks have been crazy hard and beautiful and awe-inspiring and tear-filled (both the good and the bad kind).  (By the way, don’t let the first two weeks fool you — they sleep most of the time, and then, as if on cue, by day 15, they wake from their sleepy haze and greet the world with much crying and spit-up.)  As for mama, the pain after a c-section is no picnic, though it fades ever-so-slightly with each passing day.  The huge new responsibility, the lack of sleep and showers, the crazy hormones that leave you feeling sad and scared and entirely overwhelmed and under-prepared, the need for love and acceptance and a partner that takes the 3am feeding (thank you, hubby), the misery that is breastfeeding (because admittedly, I hate every second of it, and yet a strange new guilt keeps me going), those things are harder than I ever could have imagined, no matter how many times I tried to imagine it.

Still, I can’t help but stare at her, the way she jerks her arms around, her little yawns, the way she fidgets and stills and opens her grey eyes wide at every new sound, the soft rumble of her rhythmic breathing.  She is without a doubt, the most beautiful little person I have ever laid eyes on, and she is half me and half the person that I love so unbelievably and unconditionally.  And the kind of love I have for her, for every new face and movement and breath, for her velvety skin and downy hair and her complete dependance on us, it’s all that and so much more.  I could burst with love.  I want to take it all in and savor every second.  I wish I could box up these memories, even the tough stuff, because in truth, it’s all for her, and that makes it all alright.

A few weeks ago we threw a costume party for Emmel

Took baby girl to @mfaboston and it was amazing. I

Happy Halloween from a few of my favorite stoops o

Anyone else completely in their feelings over the

A little behind-the-scenes of one of our favorite

Oh my gourd! If you are in the Boston area, you ha