I want to take a minute, or five, to break from the holiday cheer (and addictive shopping) to ask a question: How often do you call yourself the “f” word?  And by that, I mean, how often do you fat shame yourself?  And why do we do that?  With all of these holiday parties and baking and photos and fashion and new year’s expectations, I think my “f” bombs are worse than ever.  I make jokes about being fat or chubby.  I’ve called myself a whale, a cow, a heffer, and I am none of the above.  I deride my cankles, my chubby knees, my hips, on a really bad day I’d swear my ears were fat.  Mostly, I am just crazy.  Clearly.

My husband and I talked about this horrible condition girls today have, and his take:  it’s a defense mechanism.  We diffuse the situation, by blurting out that we already know we look terrible, in our minds, clearing the air, and preventing anyone else from judging us harshly (though they wouldn’t; it’s us.  We’re too hard on ourselves.  Way too hard.)  Remember that scene in Pitch Perfect …

Chloe: What’s your name?
Fat Amy: Fat Amy.
Aubrey: You call yourself Fat Amy?
Fat Amy: Yeah, so twig bitches like you don’t do it behind my back.

Is that what we think?  That everyone is secretly judging us, and our only defense is to throw ourselves under the metaphorical bus?

Is it the images we’re inundated with?  There is no doubt about it:  Hollywood is getting thinner.  So much thinner.  Kim Kardashian was wrecked throughout her pregnancy because she was convinced that she was fat, and tabloids blew up her images and insisted she was fat, so mere months after giving birth, and much starvation that I can only imagine was involved, she’s in a bikini with a professional photographer to re-claim her thin-ness.  And Kim doesn’t weigh under 100 pounds like most of Hollywood.  Actresses are literally disappearing before our eyes.  Google Anne Hathaway, Nicole Kidman, Sandra Bullock, Kate Bosworth, Jennifer Aniston, Leann Rimes, Kate Hudson, ten years ago – they were all a healthy fifteen to twenty pounds heavier – and my guess is, they loathe those old photos.  Don’t get me wrong, I adore these actresses on the Silver Screen, and I can’t imagine the kind of pressure they’re under.  But is part of that pressure keeping with the new “thin” trend?  Are we, as women, making things so much harder on ourselves, by being more and more critical?

And is that why, when we should be feeling strong and confident and beautiful, we tear through our closets miserable at the choices, and proclaim ourselves “fat”?  And are we setting an awful example for our sisters and future daughters?  I pick at myself all of the time, and I watch my teenaged sister do the same.  Only she’s more critical, and it pains me to hear her scorn herself to no avail.

According to Special K‘s latest campaign, 93% of women engage in “fat talk”, calling themselves, or parts of themselves, fat.  Isn’t the way to breaking the cycle, by starting with ourselves?  Fat Talk is contagious – and it’s weighing women down. Special K has partnered with world-renowned supermodel and actress Tyra Banks to help shift the conversation to a more positive one. Visit www.FightFatTalk.com to help SHHHHut down Fat Talk (#FightFatTalk).  And feel free to throw virtual water balloons at me the next time I complain about my thighs.

By the way, the statistics … 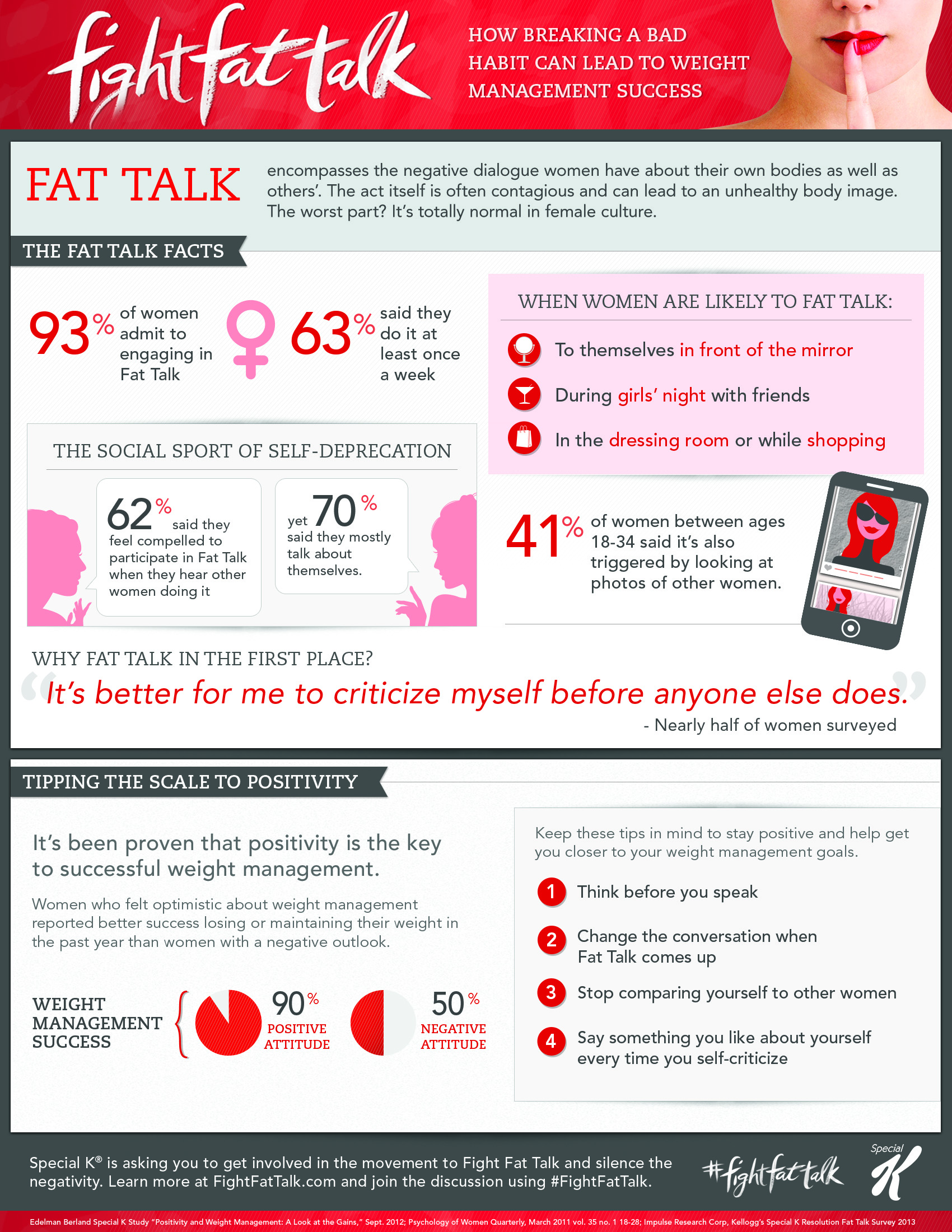 This post is sponsored by Special K. Thank you so much for supporting the sponsors that make Glitter, Inc. possible!